Uttarakhand "The Abode of the Gods" 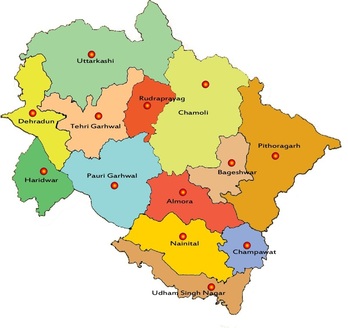 History and Geography
Uttarakhand finds mention in the ancient Hindu scriptures as Kedarkhand, Manaskhand and Himavant. The Kushanas, Kunindas, Kanishka, Samudra Gupta, the Pauravas, Katuris, Palas, the Chandras and Panwars and the British have ruled it in turns. It is often the Land of Gods (Dev Bhoomi) because of its various holy places and abundant shrines. The hilly regions of Uttarakhand offer pristine landscapes to the tourists.

The State of Uttarakhand was earlier a part of the United Province of Agra and Awad which came into existence in 1902. In 1935, the name of state was shortened of the United Province. In January 1950, the United Province was renamed as Uttar Pradesh and Uttaranchal remained a part of Uttar Pradesh before it was carved out of Uttar Pradesh.
Located in the foothills of the Himalayas, the State has international boundaries with China (Tibet) in the north and Nepal in the east. On its north-west lies Himachal Pradesh while on the south is Uttar Pradesh. Uttarakhand became the 27th state of the Republic of India on 9th November 2000. The State came out of Uttar Pradesh. Demand for Uttarakhand was first made in 1930 at the Karachi session of INC. It occupies 17.3% of India's total land area with 51,125 sq km.Uttarakhand is a place with great diversity of the region where snow-clad mountains, green hills, fertile valleys, flowing rivers and thriving lakes add to the natural beauty.Uttarakhand is also known as the Abode of the gods, there are several highly venerated pilgrimage places. The tourists must visit Kedarnath, Badrinath, Hemkund Sahib, Gangotri, Yamunotri, Jageshwar, Bageshwar, Rishikesh and Haridwar for their religious importance on Uttarakhand Travel. Each hilltop or bent is known to have a temple, big or small, which are considered very sacred by the locals.Its a region with several natural lakes, which are the center of attraction of the town and good for sporting activities. The popular hill stations of Uttarakhand are Almora, Bhimtal, Munsiyari, Mussorie, Nainital, Pithoragarh, Ranikhet, Chopta, Valley of Flowers, Joshimath and Lansdowne. For unlimited serenity and tranquility in pleasant pollution free environs, hill station on Uttarakhand Travel are ideal for vacations.Uttarakhand is also ideal for several adventure sports activities because of its geographical attributes. The tourist here takes the maximum pleasure out of adventure sports like trekking, ice-skiing, white water rafting, sailing, boating, kayaking, canoeing, yachting, water-skiing and parasailing. To climb the big mountain stretch or to pass the dense jungles of the hills is in itself very exciting. The huge water-filled rivers and deep lakes are perfect for water sports.People who come here also prefer to visit the abundant wildlife sanctuaries and national parks in the state. Also dont miss the chance tovisit the Valley of Flower National Park, Kedarnath Wildlife Sanctuaries, Nanda Devi National Park, Govind National Park, Assan Barrage National Park, Rajaji National Park and Corbett National Park. Districts: Uttarakhand has 13 districts Almora, Bageshwar, Chamoli, Champawat, Dehradun, Haridwar, Nainital, Pauri, Pithoragarh, Rudraprayag, Tehri, Udham Singh Nagarand Uttarkashi.
Languages Spoken: Langauges spoken here are Garhwali, Kumaoni, Jaunsari and Hindi.
Pilgrimage Sites: Badrinath, Kedarnath, Gangotri, Yamunotri, Panchkedar, Panchbadri, Panchprayag, Haridwar, Rishikesh, Hemkund Sahib, Purnagiri, Chittai, Kaliyar Sharif, Nanakmatta Sahib, Rettha Sahib etc.
Tourist And Historical Places: Nainital, Mussoorie, Pauri, Almora, Ranikhet, Khirsu, Champawat, Dayara, Auli, Khatling, Bedni Bugyal, Valley Of Flowers, Lansdown, Lakhamandal, Paataal Bhuvaneshwar, Gangolihaat, Jolljivi, Kataarmal, Kosani, Jageshwar, Dwarahaat, Someshwar, Baijnath, Pindari Glacier etc.

Folk Songs
Folk Songs of Uttarakhand had its root in the lap of nature. It has seen various phases of growth and has undergone lots of transformation during the course of time. It speaks about various festivals, religious traditions, folk stories and simple life of the people of Uttarakhand. Bajuband, Basanti, Chhopati, Chhura, Chounphula and Jhumeila, Jagars, Khuded, Mangal, Puja Folk Songs are some of the folk songs sung in Uttarakhand.
Some of these artists are Sh.Mohan Upreti, Sh.Gopal Babu Goswami, Sh.Narendra Singh Negi ji Gajendra Rana, Meena Rana, Sangeeta Dhoundiyal, Manglesh Dangwal, Anil Bisht, Virendra Rajput, Dinesh Uniyal, Pritam Bhartwan and others.
Bajuband
This is a folk song of love and sacrifice between the shepherds. It is a love dialogue between the man and woman or between a boy and girl which is sung in the form of a folk song
Basanti
'Basanti' folk songs are composed for the coming spring season when flowers, bloom and new life spring in the valleys of the hills of Garhwal. The folk song is sung individually or in groups.
Chhura
'Chhura' folk songs are sung among shepherds in the form of advice given by the old to youngsters, having learnt it out of their experience, particularly in grazing sheep and goats.
Chhopati
These are the folk songs popular in Rawain-Jaunpur area of Tehri Garhwal. 'Chhopati' are the love songs sung between the men and women in the form of questions and answers.
Chounphula and Jhumeila
'Chounphula' & Jhumeila' form part of seasonal dances which are performed from 'Basant Panchami' to 'Sankranti' or 'Baisakhi'. 'Jhumeila' is sometimes mixed but is usually restricted to women. 'Chounphula' is a spinning dance performed by all sections of the community, at night, in groups by men and women. 'Chounphula' folk songs are composed for the appreciation of nature during various occasions. Chounphula, Jhumeila and Daryola folk songs all derive their names from the concerned folk dances.
Khuded
These folk songs depict the suffering of a woman due to the separation from her husband. The woman curses the circumstances in which she is separated generally when the husband is away looking for a job. 'Laman' another folk song is sung on special occasions expressing the sacrifice that he is willing to do for his beloved. 'Pawada' also belongs to this category of folk songs where separation is felt when the husband has gone to the battlefield.
Mangal
'Mangal' songs are sung during marriage ceremonies. These songs are basically 'Puja songs' sung alongwith the Purohits who keep enchanting 'Shlokas' in Sanskrit according to the Shastras during the marriage ceremony.
Puja Folk Songs
These songs are connected with the Puja (worship) of family deities. There are other Puja songs connected with 'Tantra' and 'Mantras ' to exorcise evil spirits from human beings.

Dishes & Recipe
These dishes and recipes along with richness in its taste are highly nutritious. The recipes to these dishes are simple too to prepare.
Some of these Pahari dishes are as follows: